Skip to content
In my quest to always help provide my clients free, cheap and easy to use tools, I have been on the lookout for a jQuery plugin that would provide the ability to: (1) provide non-delayed, real-time character counts, (2) enable easy to customize visual behaviors, and (3) permit event and DOM hooks for the savvy with more advanced character counting needs.   While there are other similar tools out there, none adequately met these goals. Therefore, I created the jQuery NobleCount plugin.

NobleCount… for a more ‘proper’ count of the characters remaining. 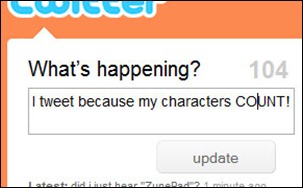 A very common requirement with many of the more social products of the various companies I work with is the dynamic display of the number of characters remaining in a textarea, Twitter-style. When implemented, every one of these companies either developed a simple solution in-house or found a re-usable front-end plugin online. Most common, implemented within these products, and of all I could find open-sourced online, were sources lacking customization and/or, almost universally, lacking the desired user experience – updating the character count AFTER all or most of the user’s typing had ceased.

As a result, and also in my quest to always help provide my clients free, cheap and easy to use tools, I have been on the lookout for a jQuery plugin that would provide the ability to …

While there are other similar tools out there, none adequately met my goals. Therefore, I created the jQuery NobleCount plugin.

NobleCount is a customizable jQuery plugin for a more improved counting of the remaining characters, and handling of resulting behaviors, of a text entry object, e.g. input textfield, textarea. Also, NobleCount supports pre-existing text within the text object and jQuery chaining.

Events and CSS class alterations, if defined, are triggered based on current user interaction with the target text entry object as well as the current state (positive or negative) of the character remaining value.

To properly initialize, both the text entry object and the object that will store the total number of characters remaining must exist and be passed to NobleCount.

Upon successful initialization, all appropriate events and classes are applied to the CHARACTERS_REMAINING_OBJECT, including the storage visually (if not disabled) or only in the DOM (if enabled) of the integer value representing the number of characters remaining.

Also note that within the NobleCount context…

To change these settings, they can either be accessed directly…

… or at the time of initialization…

The default settings data structure is…

The parameters are defined (and all can be overridden) thus…

Having custom function append their own data to c_settings is also a great way to pass in and remember other state information that will be needed upon the triggering of NobleCount events.

Status updates can be found here, jQuery NobleCount.
If you find this useful, or have any questions, ideas, or issues, leave a comment.